Since James Ivory’s ‘Maurice’ put him on the map in the late 1980s, Hugh Grant has built a legacy out of iconic roles across a wide variety of cinematic genres, including Oscar fodder, family adventures, and suspenseful thrillers.

However, if there is one type of film that the name Hugh Grant is synonymous with, it is the romantic comedy or Rom-Com.

From playing a young and charismatic Prime Minister to a shy Notting Hill bookstore owner, Hugh Grant has shown over and over again that he can play vastly different roles with panache and charm, all the while stealing our collective hearts.

And that is why today I’m going to celebrate Mr. Grant’s ample discography by listing his best romantic comedies of all time.

With lots of witty, charming, swooning moments with Hugh Gran, in no particular order, here you have:

Hugh Grant plays the role of Keith Michaels, a struggling screenwriter who, having seen his career go down the drain after winning an Oscar for best screenplay years prior, moves to a small town in upstate New York to work as a creative writing teacher

There his character meets a beautiful and quirky single mother played by the one and only Marissa Tomei.

The Rewrite is a sophisticated, intelligent, self-assured romantic comedy in the best tradition of the genre. What stands out most about the film is its clear affection and respect for the craft of writing, the skill of education, and, above all, for its protagonists.

Directed by Paul and Chris Weitz, and starring Nicholas Hoult, Rachel Weiz, and Toni Collete, alongside our beloved Hugh Grant, About A Boy is a wonderful adaptation of a Nick Hornby novel of the same name.

Hugh Grant plays Will Freeman, a very handsome and very wealthy bachelor whose only worry in life is to avoid responsibility in all of its shapes and forms. However, Will is forced to learn an important life lesson when he meets a hopeless and rejected 12-year-old boy named Marcus Brewer, played by a young Nicholas Hoult, who is bullied regularly by his peers at school.

So, while Will does his best to teach Marcus to stand up for himself, Marcus inadvertently teaches Will that it’s never too late to grow up.

About A Boy was rightfully nominated for an Oscar for Best Adapted Screenplay. 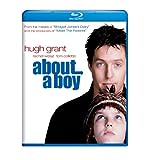 1,549 Reviews
About a Boy [Blu-ray]
Check Price On Amazon

Two Weeks Notice is one of several 2000s romantic comedies that will forever live in our memories.

Hugh Grant plays Millionaire George Wade, who owns a highly successful construction company and does nothing without his multi-tasking legal advisor Lucy Kelson, played by the beautiful and funny Sandra Bullock.

Lucy is a smart, capable lawyer with a keen mind, who resents the way George treats her.

While charming, George is self-absorbed and treats Lucy more like a babysitter than a Harvard-educated professional. So Lucy decides to put a stop to the whole thing, and turn in her two-week notice.

And in true rom-com fashion, George realizes that he can’t live without her in more ways than one.

Paul and Meryl Morgan lead a picture-perfect life, with the sole exception that their marriage has fallen apart thanks to unfortunate infidelity and the fact that they have witnessed a murder and become the next target of the murdered.

Starring Hugh Grant alongside the inimitable Sarah Jessica Parker, Did You Hear About The Morgans is a very funny, solidly scripted, albeit conventional rom-com that in my humble opinion deserved more praise than it received from critics.

1,636 Reviews
Did You Hear About the Morgans? [Blu-ray]
Check Price On Amazon

Michael Felgate, played by Hugh Grant, is a clerk at a famous Manhattan art auction house and is now ready to take his relationship with Gina, played by Jeanne Tripplehorn, to the next level.

Mickey is now more than ready to propose to Gina, whom he’s been dating for three months, so he asks to meet her family.

But the last thing he expected was for the lovely and mousy teacher to be the daughter of a dangerous crime lord and mob boss.

The movie has plenty of traditional romantic comedy beats with an added layer of mafia mischief. The result is a quirky comedy uplifted beyond the cliche by the performances of all involved, especially by Hugh Grant.

Love Actually is in parts a Christmas movie and in parts a classic rom-com. Told through a series of varied stories, we are shown the lives of a wide cast of characters as they maneuver the intricacies of love. Case in point, Hugh Grant plays the role of a Prime Minister who is madly, desperately, in love with his assistant; a fact that proves highly inconvenient for a lot of people.

Love Actually deftly explores the many facets of love and heartbreak.

Much has been said about Love Actually, but I’ll keep it short and simple. This is one of the best romantic comedies of all time. Go watch it if you haven’t seen it.

I almost forgot to mention how good the soundtrack is in this movie. Seriously, really, genuinely good.

The singer, a superstar on the rise, has hired Alex to write her a song titled “A Way Back Into Love”.

And that is what we will see happen throughout this fun, lighthearted and loving feature film. Alex will find his back into love when he meets a beautiful woman, played by the legendary Drew Barrymore.

Notting Hill is one of the most critically acclaimed and universally liked romantic comedies ever made. And, how could it be anything but that? It stars Hugh Grant alongside none other than Julia Roberts.

Notting Hill has a simple premise. A beautiful and highly popular actress enters a cozy bookstore owned by our male lead.

If you add to that formula a fantastic soundtrack populated by the oh-so-catchy songs of Elvis Costello, Ronan Keating, and Al Green, along with a varied and fun cast of supporting characters, and a well-crafted script full of witty and charming dialogue, you get a movie that is easy to digest and easy to love by just about everyone alive.

Also, it’s entirely possible that Julia Roberts may never have been as charming as she is here, and Hugh Grant does here what he always does so well: play a charming and endearing puppy-eyed rom-com lead.

Four Weddings And A Funeral is a memorable, highly sentimental romantic comedy that achieved a perfect synthesis of seemingly opposing genres in an ensemble as harmonious as it was suggestive.

Written by Richard Curtis, and starring Andie MacDowell, Simon Callow, and James Fleet alongside Hugh Grant, the movie is presented through a novel-like structure.

The plot deftly follows a group of friends who are brought together by the diverse weddings of various acquaintances; weddings which are celebrated according to various religious rites and always shown with a well-intentioned and lighthearted sensibility.

Four Weddings and A Funeral has a brilliant script, a particularly inspired production, and an excellent cast that made it one of the best romantic comedies of the 90s.

Samuel Faulkner, played by Hugh Grant, is a handsome man who has everything he could want: a beautiful and loving girlfriend, a highly psychological clinic, and a lightning-fast red Porsche.

His life is perfect, but it quickly falls apart when his girlfriend Rebecca, played by a young Julianne Moore, breaks the news that she is pregnant with her first child.

Sam is not ready to hear that. Sam is not ready to raise a child. Sam does not want the responsibility. But Sam now has nine months to grow up and face fatherhood, or face the consequences of his selfish ways and risk losing everything and everyone that loves him.

The character is funny and charming and outlines one of the best Hugh Grant rom coms of all time.