Scooby-Doo is the dog every kid around the world grew up with. The original cartoon series started when the first episode of “Scooby-Doo, Where Are You?” was aired on 13th September 1969. Scooby-Doo with the gang taught us how to overcome our fears and also the reality of not-so-real monsters.

It seems every year has a new series and movies in a new style. But still, the nostalgic factor keeps striking and fans cannot seem to get done with the original. If you want to binge-watch “Scooby-Doo, Where are you?” Here is a list of the top 5 episodes from the original cartoon series, you need to watch. 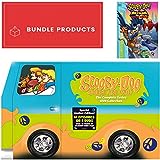 226 Reviews
Scooby-Doo, Where Are You!: Complete Series + Scooby-Doo! & Batman: The Brave and the Bold Bundle DVD Set
Check Price On Amazon

The sixth episode of season 1, aired on October 18, 1969. With its creative name, some creative things are happing in this episode, including Shaggy showing off his ventriloquy skills.

The gang drives to their friend Sharon’s house for a hangout. As soon as they show up, the worst possible thing happens. Sharon’s uncle had disappeared. This is where the mystery beings. Mysterious voices, a missing family fortune, and where is Uncle Stuart?

The next episode on the list is from season two and was the fourth episode, aired on October 3, 1970. This was one of the most “violent” episodes and it takes place during a school dance.

The episode starts with the gang hanging around, doing normal gang things. The dance was about to start in a barn. What could go wrong? The school/barn dance does not go as planned when they receive an unexpected guest: The “now-infamous” green man shows up and spoils the party.

Aired on December 6, 1969 “Which Witch is Which,” is the thirteenth episode of the first season.

Returning from a fishing trip, Mystery Inc. decides to take a shortcut through the dark and a creepy swamp. Again, what can go wrong?

The gang gets lost and finds a stranger to ask for direction. To their surprise, the man turns out to be a zombie. Furthermore, the Swamp turns out to be haunted by a zombie and a witch that keeps people away. Scooby and his gang get stuck in there and have to solve the mystery that unfolds

The third episode of the second season aired on September 26, 1970. It is considered one of the iconic episodes as it was the first time when the mystery gang was named “Meddling Kids”.

It starts with Shaggy fishing and trying to catch a fish but instead catches a caveman! Frozen in a block of ice, the gang takes him to the nearest aquarium to thaw him out. What could go wrong?

This was one of my most favorite and memorable episodes of the show. I must have had it on VHS or something because this one brings up a lot of memories.

The gang decides to help their professor in the anthropology department. He shows them a 3000-year-old mummy of Anka, Dr. Najib warns them of a legend that the mummy will come back to life.

The gang goes out to the ice-cream shop and when they come, the worst had happened. The professor had been turned to stone, the mummy had disappeared and they find themselves being chased by said mummy who has an odd obsession with a  rare coin that Shaggy has.

Is your favorite listed here? If not, let us know!

226 Reviews
Scooby-Doo, Where Are You!: Complete Series + Scooby-Doo! & Batman: The Brave and the Bold Bundle DVD Set
Check Price On Amazon